With inflation and fuel bills on the rise, a difficult winter may lay ahead for many in our community.  When a surplus was found in the lodges dining account, it seemed apt way to use the funds to help ease the burden for some in our community.

The Lords Larder is a local food bank run by volunteers that has been in operation for over thirty years, initially helping those identified as being in need by the church. Growing to meet the demands of the community, last year they helped over 8000 people get through some hard times. They rely on donations of both food and financial support, both of which could reduce as everyone tightens their belts.

People in the photo from left to right 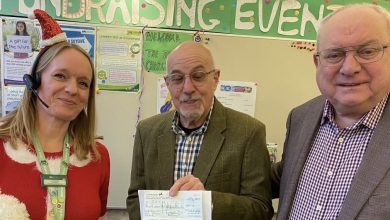