Below is a report that was submitted by Ravenswood School a huge well done to Rob and the Masonic Fishing Charity Team.

We were fortunate to be offered a day’s fishing at Jacklands fishing lake with the wonderful Masonic Fishing charity on the 12th of October. Elm class were a little apprehensive, as were the parents and staff, as to how they would access the day. However, when we arrived these fears were instantly blown away. Rob and his team made us very welcome and recognised what the class needed and how they could offer it. They were all very excited with their goody bags and instantly tried on their goggles and hats.

We then got the pupils straight out on the lake with their own fisherman which meant they were not hanging around for any length of time. The fishermen were amazing and recognised that most of my pupils were not able to hold the pole on their own and so helped them. They cast the line for them and then took the weight of the pole. They did it in such a way that my pupils felt they were doing it and were not being patronised.

One of my pupils finds it very hard to stay still for any length of time. However, his fisherman helper connected with him and the activity and he was able to focus for half an hour and listen to the instructions. This is a huge achievement for my pupil and I am very grateful to his helper for understanding him so quickly and supporting him so well.

Another of my pupils is blind. I was concerned how she would be able to access the day. However, her fisherman was brilliant. He explained everything he was doing and got her to touch as much as possible. He also understood that every so often she needs to have chance to move about and a spin. He engaged her when appropriate and then allowed her to move away and spin around for a few minutes before reengaging her. She fully understood what she was doing due to his explanations to her. In fact, when we went to lunch she insisted that she went back and did more fishing with him. A huge thing for a child so food oriented!

Whilst everyone was having a go on the bigger lake Rob took one at a time to the trout lake to catch their own trout to take home. This was very exciting! Rob understood once again that they would struggle to catch them independently and so he caught the fish while the pupils watched for the line to dip under the water.

Once they were on the line the pupils held the pole with Rob, by themselves or with a teacher. They then brought the fish in themselves. All my pupils were so excited that they had caught a big fish. Rob made them all feel special and clever. He did not focus on the fact that he had caught them but celebrated with the pupils that they had caught their own fish. He showed them all how to net them, land them and then kill them. They all had a go with the priest and touched or held their fish before it went in the bag. Many of my pupils have sensory difficulties but Rob did not pressure them to touch or hold the fish and made it completely stress free. This meant that most of my pupils attempted to feel their fish and get hands on with the activity.

They were all then very excited to weigh the fish and see who had caught the heaviest. (brilliant chance to meet some maths targets!!) They were encouraged to read the scales themselves and then the weight was recorded. They were all very excited to see the numbers come up. Even though many were unable to read numbers that high the fisherman helping them encouraged them to read them as individual digits (6, 2, 0) and then helped them put it together as the full number. He did not rush them or pressure them and they all felt able to have a try. Some of the pupils are non-verbal and so just tap or point and he was patient with them as they did this and then he told them the number.

Robs team understood the children’s needs and recognised that lunch needed to be a little earlier than planned so at 12.30 we all sat down to an amazing lunch of burgers, crisps and fruit. The pupils all tucked in and it didn’t take long for empty plates (it all went before we could get a photo!). There was plenty of space for all pupils to sit down and eat at a table and there was plenty of food. They were even able to accommodate a couple of dietary needs that arose from the group. No one went hungry that day!

After lunch the option was there to do some more fishing. Some of my pupils needed medication and toileting so Rob and his team took those who wanted to go back to the lake while staff attended to the others. They continued their fishing in the sun and the others were able to join when they were ready. There was no pressure put on any one to join in or to hurry up. This made for a very relaxing day for pupils and staff (not a common thing when you take 14 SEND pupils out on a trip).

We rounded the day off with medals and certificates. The pupils were very excited to be given an award and proudly took these back to school to show everyone who would look.

Overall, we all had the most fantastic day. I returned to school with a very tired class of pupils and staff. But the tiredness did not wipe away the smiles or the sense of achievement that they all felt. I can not thank Rob and his team enough for what they do for our pupils. They open doors that otherwise would be firmly shut to classes like mine.  I really hope that we can come back again and share some more adventures with this team and that other schools are able to experience what we did.

To back up all that I have said, the parents were so pleased with what their children had experienced. One parent is going to look into the respite carer taking their child fishing on a weekend as they have never before focused on anything like he did on the fishing. Others sent in the below comments expressing their pleasure: –

“It looks like they had a brilliant time, thank you to the Mason’s for providing the experience and the lovely goodie bag and certificate! What a brilliant opportunity.”

Thank you everyone for an amazing day and we hope to see you all again soon. 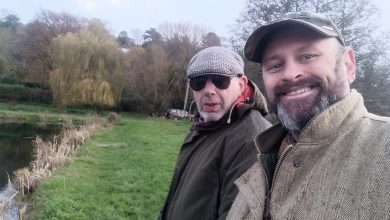