The presentation of a Naval Sword by Rev W Bro Jeremy Hellier, Provincial Grand Orator to the WM of Royal Naval Lodge, Martin Duan. W Bro Jeremy has long standing connection with the lodge as his father was initiated into the lodge in Malta in 1960 and died in 1999 whilst in office as our Secretary after the move to Yeovil. 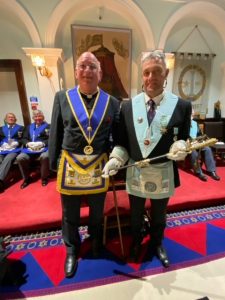 The sword was his uncle’s who joined the RN in 1943. He was later commissioned and had the honour of being the Captain of HMS BARFOIL as well as being the last uniformed Master Rigger in the RN. W Bro Jeremy after seeing the light (he served as Chaplain the Army), joined the RNR, putting the sword to good use during his service, retiring as a Commander.

He has three sons, two of whom are serving in the Army as senior officers and therefore have no use for the sword. His grandson is serving at RNAS Yeovilton as an Air Technician with the Army Air Corps. W Bro Jeremy wanted the sword to go to a good home and the logical choice was the lodge. 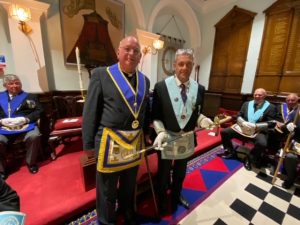 W Bro Duan thanked W Bro Jeremy and said that the sword would now be used by the Tyler as in the past we borrowed a sword!